Today, as a layman, I will take some liberties by paraphrasing, an analogy of the Ten Commandments as they are provided to us in the scriptures related to our perception, our commitment, our view, our ideas, our respect, our due honor to the Creator of this universe, its natural laws, the plants, animals and us humans.
To start this off let’s imagine that you’ve been hired by a certain company. You’ve been there a few days, seeing the operation first hand, walking the grounds, captivated by the garden and getting acquainted with the purpose of the company, its operation and how it all works together. 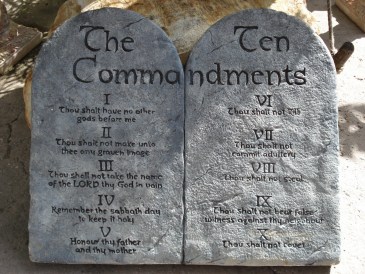 The owner then calls you into his office. Comfortably seated facing each other, he starts telling you why he called you in. “I want you to know about this company and the rules I have for your safety and your benefit, and how it all came about.” He then proceeds in detail the intricate process he went through to make this business work: how it came to be, the first thoughts, the design, the first implementation of the vast structures, the outside facilities, the garden, the grounds, the gathering of the numerous parts holding it all together, the planning of how it would all work for the benefit of the working partners, the customers and himself. And how long it took.

“You’re an important part of this operation.” He informs you. “You have some freedoms within my basic rules to innovate new technologies and ideas too that will be of great use to our customers and your fellow workers, and I’ll guide you on the implementation of those.” He tells you that as a partner in this venture you would benefit greatly; your family and all your children and grandchildren will reap his rewards by your faithfulness as a partner. He proceeds to briefly tell you what expectations he has for your daily intermingling with your fellow workers and customers that benefits everyone; things like refraining from making images that could become idols. “Don’t do that”, he emphatically says.

“Oh, one other thing too that bothers me greatly. Don’t call me names. It’s disrespectful and you should not call your fellow workers names either. Got it? Cooperation by all benefits all.”

“Now, welcome to my world. I’m available for consultation anytime.”

You come away from the office impressed and honored that he chose you to be part of this company. Sounds wonderful, you’re excited and pledge to yourself that any other company coming down the line with an intriguing proposal shall be shunned.

“He created this, I work for him.”

Footnote: Could that phrase (you’re fired) have originated during biblical times as Jesus was instructing in parables Matt 13:41-42

“The Son of man shall send forth his angels, and they shall gather out of his kingdom all things that offend, and them which do iniquity; and shall cast them into a furnace of fire: there shall be wailing and gnashing of teeth.”