The news is abuzz of sexual impropriety from celebrities, show hosts, politicians, leaders here and there. What’s going on? Back in the days of the 50’s and 60’s, even while youngsters were enjoying the hippie clan of live happy and high, the news did not highlight the problems that sexual freedom was rampantly exploding like a hurricane destroying lives, families and reputations as it is now. Then sexual promiscuity was a matter to be kept behind closed doors.

So, perhaps it is time to let it all out folks. Tell it like it is. We like sex.

The human being enjoys sex here and there. Playboy came along and beautifully portrayed women as objects for males to use to satisfy their lusts. Hollywood installed the red carpets to portray women in scanty drapery with body curvatures to admire as the actresses enjoyed the spotlight furthering their career. The movies explicitly moved the act into our living rooms as we watched ‘in horror’ that they would show such for our teens and youngsters to watch.

We like to comfortably relax, and watch others play make believe, and they do it well, being paid tremendously for negating any morality they may have had before entering the business. Ah, it’s just make-believe. And we go on with our daily business at hand. Did you see the latest, is the talk at the coffee station?

But we know that there are consequences to our actions.  To whom do you put you trust? The celebrities, the media, the politicians we can see and hear, or the words of the creator God we cannot see or hear except for that still small voice within our spiritual conscious: “don’t do that.”

Well we sure have multiplied. Since the Lord God created us in His image, then there is that image floating around each of us ready and willing to . . . . ah, multiply our sensual feelings. Imagine if that finality of the sexual act was not enjoyable, but just a routine function of a physical activity that did not have an enjoyable part to it. Would we shy away from it? Would we consider it a difficulty to avoid? Would we have multiplied the earth?

Do we even think about the consequences? Not just the repercussions from mates, the family, the children, the bosses, the media, the left or right politically, but the final consequence coming after that last breath of air.

Oh, but that’s a myth? Nothing to worry about there? We can’t see it or hear it or touch it on the buttocks, so it can’t be real.

No, God created that sexual act as enjoyable so that we would multiply. And God also provided some rules to go along with it.

Genesis 2:24 “For this reason a man shall leave his father and his mother, and be joined to his wife; and they shall become one flesh.”

Hebrews 13:4 “Marriage should be honored by all and the marriage bed kept undefiled, for God will judge the sexually immoral and adulterers.”

Perhaps our churches should get back to the Hell-Fire and Brimstone preaching such as The sermon of Jonathan Edwards in 1741, entitled “Sinners in the Hands of an Angry God”.  “There are in the souls of wicked men those hellish principles reigning, that would presently kindle and flame out into hell-fire, if it were not for God’s restraints. There is laid in the very nature of carnal men, a foundation for the torments of hell. There are those corrupt principles, in reigning power in them, and in full possession of them, that are seeds of hell-fire.”

A long read, but wow, if the majority of weekly sermons would be similar to that of Edwards, how it would affect our comfortable lives? 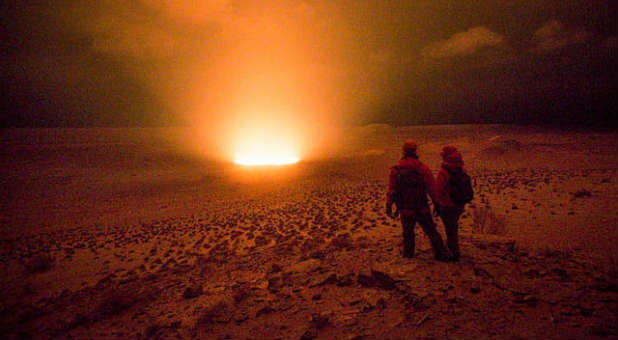 It’s time we start getting real about the judgment of God. (Flickr/Creative Commons)

From CharismaNews 2015. By John Burton.

“We need a fresh wave of great awakeners—those who will unapologetically preach hell-fire in today’s dire end times.

To the shame of much of today’s church there has been a firm and steadfast rejection of any truth that doesn’t result in people feeling happy affection for God.”   Read more . . .